Next door’s building close to my property

If your neighbour’s building is close to your property, or indeed you wish to build close to your neighbour’s property, then you do have to get permission via the Party Wall Etc. Act 1996. We should add that you will also need to get permission from the Local Authority for both building control, or building regulations works, as it is sometimes known, and Planning Permission, which relates to how the property looks.

The Party Wall Etc. Act 1996 deals with excavation and construction close to your property within Section 6 of the Act.

There are two measurements to remember: 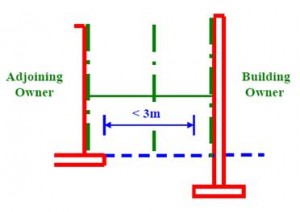 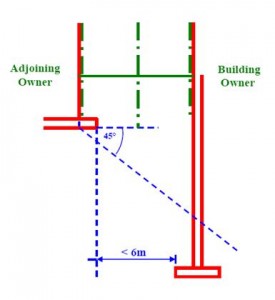 As with many things with the Party Wall Act it is not quite as simple and straightforward as it first seemed.

What does three metres mean from my property?

How on earth do I find how deep and wide my foundations are without digging them up?

This is a good question. The answer is, unless you do dig them up, or the property is relatively newly built and someone had the foresight to carry out as-built drawings, or the building controller officers from the Local Authority can confirm the depth and the width, then you will have to dig them up, or assume they conform to common building practice (we won’t use the term best practice) of the time and era that the property was constructed.

For domestic modern properties it is a fairly simple exercise for an experienced party wall surveyor. On a commercial construction a great deal of discussions can take place as to where and how deep and wide the foundations are.

Where is the boundary line in the three metre rule?

The boundary line doesn’t have to be on, or near, or next to the wall, it just needs to be between the two properties. So, the building owner could typically be building within their own land, say 1.5 metres, and still require a Party Wall Act.